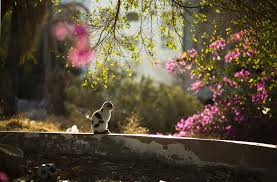 Third month of the calendar year.

Today I am at the coast. The sun does a slow strobe: in and out, bright and gray, then bright again. Through the window, clouds cruise past, fast like they have some place to go. Probably heading to Portland to rain on someone’s parade. Portlanders are used to it. Everything they say on Portlandia is true.

My cats are napping. Big Red bigger than his bed, sprawls onto the couch at both ends; Little purrs as she sleeps, curled into a ball. Tinkerbelle is awake. She watches out the window for prey, a bird or a squirrel. I’ve seen her growl at deer that go past in the forest. Brave tiny girl, I’m so glad there’s glass between her and her foe.

And Harry. Harry is king. He sits so proud, at seventeen years of age, on his heated mat in his chair by the fire. Harry is in renal failure, end-stage – Hush, don’t tell him because he doesn’t seem to know. But that’s absurd; certainly he knows. He accepts; that’s what cats do. They live till they die. Unlike people who run and hide and fight to defer facing the inevitable.

But I digress. Where were we?