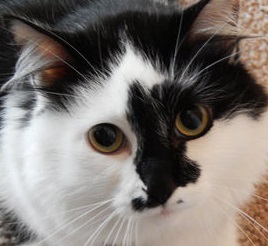 Lux was in the house! Big cat; huge personality.

From that moment on, Jim’s and my world revolved around him. We both worked, but the moment we were back, it was all about Luxie: How was he feeling? What was he going to do next? Neither of us considered him dangerous or even feisty. I see more difficult cats at the shelter every day.

Lux was like a child, inexperienced in catly ways. Watching him learn about play, about food, about his new digs was heartwarming and fascinating. Every day he seemed to come out of that shell a bit more, but I’m getting ahead of myself. Let’s go back to that first day:

Adapted from my Lux Journal:

Day 1: Jim and I got up for work. Lux was sleeping by his water. He enjoyed being petted but then went back under the blanket. I let him roam the room. He was curious but still crouching and nervous. He hadn’t eaten anything overnight.

When I got home from work, we moved Lux to a bigger room. Lux was friendly and curious about the new surroundings. Explored, used litter box, checked out cat tree and window. Then he went back to his litter box and vomited a small amount of liquid. After that, he retreated under the coffee table, where he hissed at me for the first time. His hiss was nonthreatening; at first I thought it was a yawn. I petted him, and he enjoyed it, but when I stopped, he hissed again. Since he still hadn’t eaten and had vomited, he probably wasn’t feeling too good.

Day 2: Over the next night, Lux ate some tuna, which seemed to break the ice for eating. By evening, he was gobbling all food in sight, wet and dry. He became more outgoing, sitting by the window and on his cat tree. 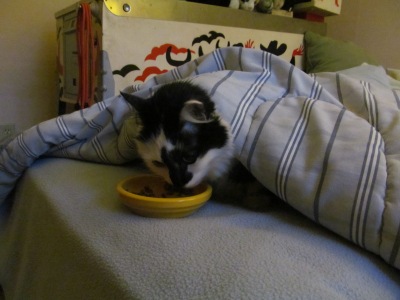 Lux’s people said that Lux didn’t play. Jackson wanted to get him to play, since it’s so much a part of being a cat. Play also reduces stress. I tried a ribbon toy. He was very tentative, though he did follow it around the room a little. He was also interested in some shredded paper I was working with. All the world is a cat toy…