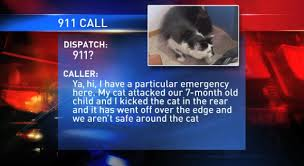 On May 1st, Lux had his second outburst, the first being when his family called 911 on him. Since I’d met him a month before, I was silently but condescendingly laughing at the original event, thinking his people had overreacted, that they just weren’t as cat-savvy as me. As time wore on, it had seemed more and more likely that the outburst had been wildly blown out of proportion – after all, the baby pulled Lux’s tail. We all knew that babies shouldn’t be left alone with cats for that very reason.

I was arrogant. I admit it. I paid for my shortsightedness.

Though Lux didn’t attack during the brushing incident, everything about his stance was fearsome. In all my cat experience, I’d never seen anything like it, and I’ve seen a lot of cats: Feral cats; fraidy-cats; angry cats; cornered cats; injured cats; and starving cats, fighting for scraps. Lux’s outburst was not like any of them.

With shaking hands, I called Jackson’s producer, the OHS media person, and my husband. Lux’s howls had cut off and now there was only silence from his room. As I sat on my couch, cold fear pressing at my heart, I knew this was a pivotal event; that nothing would be the same.

Jackson got back to me immediately, wonderfully compassionate and sad that this had happened. He never once questioned my cat-handling ability and for that, I was thankful. I personally felt like the hugest failure on earth. What had I done wrong? I kept going over those moments preceding the outburst: Had I done something to precipitate it? I continued to come up with the same answer: No.

Jackson gave some instructions on what to do next, and when Jim came home, we went to visit our boy. He was still anxious and aloof but no longer vocal. We spent some time with him but he seemed to be in his own world. After a while, his anxiety began to mount. We fed him, made sure he had water and toys, and left him to it, hoping that the night would calm him.