In the dream, we were doing an interview. I recall stark details: the nap of the plush velvet couch; the glare of hot spotlights; Mr. Nimoy’s smile for the audience, one last time.

This was his final appearance; time to say goodbye.

The photographer snapped a shot of us, still happy, still together, beaming at the camera as if it were a normal day and not the first in half a century that the famous man would be missed from our lives. Then it was over. Forever.

Though Spock never smiled, Mr. Nimoy smiled all the time. He shook my hand and bowed out. I don’t often cry, in dreams or waking, but I cried then, great heaving, tearing sobs that hurt down to my soul. A door had closed, locked, and vanished in a poof of interdimensional stardust. Leonard Nimoy was gone.

When the photo came back, a grainy black and white 11 x 14, I was ecstatic. There we were, smiling, leaning close. Ironically, in the picture, we were both young. The photographer had captured time times two.

At my computer writing this memory, catching the green of spring leaves in my peripheral vision, I despair at saying goodbye. I’ve been lucky; it’s been a while since I’ve had to face that final parting. But I know it’s only a matter of time: the life-altering moment when the doctor says cancer; the time-stopping flash as the Sunday drive turns deadly; the unexplainable shift when the aging heart says it’s had enough.

How will I face that loss? How will I live when my loved ones pass from my world? How will I continue without them?

I know it has to do with one day at a time, with accepting the things I cannot change; with faith in my Higher Power and the friendship of my fellows. It has to do with miracles and belief in them. Not the miracle of an endless life – there is no such thing – but the miracle of moving on. The death of a loved one changes us forever, but we can still celebrate life by living, by being useful, by appreciating the beauty of an unfurling rose, the softness of fur, the power of love until it’s our own time to go.

Will I see Leonard Nimoy in Heaven? Will I see my mother? My cats? Or will I float in the universe as indestructible energy? To me, they are the same. Nothing can be destroyed, only changed.

Goodbye, Mr. Nimoy. and thank you. Whatever it means where you are now, live long and prosper. 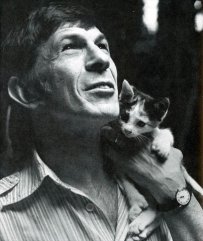