Like stones beneath Placid River, a dark tragedy lurks.

Placid River Runs Deep will be my first published non-cat mystery. It takes place in 2010, involving a woman who has just found out she has hepatitis C. This is before the “cure”, remember, and as she awaits the results of her medical tests, she is terrified. Then a neighbor is murdered and another dies a mysterious death, giving her something else to think about. A handsome artist whom she hasn’t seen since childhood becomes friend, lover, and then protector, but his care may be coming too late… 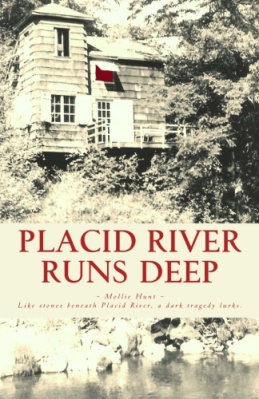 When Ember Mackay learns she has a life-threatening illness, she flees to the old Placid River cabin, but instead of solace, she finds mystery, murder and a revenge plot that has taken a generation to unfold.

Diagnosis: hepatitis C. It’s a shocker for Ember Mackay. Cirrhosis, liver cancer, a horrible lingering death. In 2010, there is no cure; at 37, she is far too young to die.

Ember needs time to process. She makes for bucolic River Lane, the little summer community her grandparents helped establish long ago in the wilds of southwest Washington. The old cabin holds happy memories, but can they ease the grim new reality that has changed Ember’s life forever?

Unexpected empathy comes from Grayson Tanner, a neighbor on the lane. Ember and Gray haven’t seen each other since they were kids, but hepatitis C has touched his life before, and he understands her plight as perhaps few others can.

The focus shifts when an elderly River Lane patron is found horribly murdered and his brother dies soon after of a suspicious heart attack. When a third neighbor is knifed at the local Independence Day fireworks, it becomes clear that no one on the lane is safe.

Gray and Ember put their heads together to find a pattern, but what they discover adds up to a scheme so unthinkable they pass it off as pure fancy. By the time Gray realizes Ember is next on the killer’s list, it may already be too late.

This murderer knows his quarry well and takes advantage of Ember’s compromised health. After three decades in prison, only annihilation will serve his needs, but when his long-imagined plan becomes reality, he finds he is only a victim of himself.

Placid River Runs Deep should be ready for presale soon.