CAT’S PAW, Book 3 of the Crazy Cat Lady mystery series is happening fast. Well, not that fast – I’m only on the 2nd draft. But I have a launch date in August, so I’m on it. Let’s see where adventure takes Lynley this time.

When sixty-something cat shelter volunteer Lynley Cannon attends an exclusive art retreat at the world-famous Cloverleaf Animal Sanctuary, she gets more than a lesson in cat art. Accused by a vigilante group of double homicide, she persuade them of her innocence and heads for home, only to have murder follow in her wake.

I’ve been called a crazy cat lady all my life, but I never knew what crazy was until now. Languishing in this dingy hole, knowing my freedom is in the well-meaning but inept hands of amateurs, I fear I shall lose my mind. The options are simple: I could be released or I could be arrested. If released; I put the whole thing behind me; if things go the other way, well, that’s where it gets really crazy. I would need a lawyer; I could go to trial. I could be convicted, sentenced, and sent to prison for a very long time. You know I didn’t do it, don’t you? I’m a cat shelter volunteer, for goodness sakes! I’m not a killer.

I have to laugh—the thing I regret the most in this gray limbo of incarceration is not the fear of an uncertain future; not the anger at being judged without proof; not even the horror of what’s going on outside that door. It’s the absence of cats. The absence of my cats.

My name is Lynley Cannon, and on any normal day, I would be helping out at my local cat shelter, visiting with my lovely and intelligent granddaughter, researching my labyrinthine Scottish ancestry, or enjoying some other innocuous old-lady pursuit. Since I am retired, my time is my own. There is little I cannot do as long as I plan it properly with no heavy lifting and many convenient bathroom stops. I hadn’t realized how accustomed I’d become to that freedom until it was so rudely ripped away from me.

As with the cats I so love, I possess an innate curiosity which makes my life both interesting and adventurous. At my age, however, adventure poses a certain amount of risk. Circumstances that for a younger person would be fun and athletic could land someone like me in the hospital. Yet I persevere. I rush in without considering the consequences. It’s my nature.

That’s how I came to be at the Cloverleaf Animal Sanctuary Annual Art Retreat. I’m not an artist but I have always wanted to visit the celebrated shelter located on its very own island among the beautiful San Juans. When the opportunity arose, thanks to an old school friend who happens to run the program, I jumped on the it like a cat on catnip.

Though most of the other participants were younger, more extroverted, and certainly more creative than I was, we all got along like kittens in a clowder. By the second day, it was as if we’d known each other forever, and I figured we’d stay in touch long after the retreat was over, Facebook friends if nothing more. Only one among them had rubbed me the wrong way, a bitter, spiteful woman who had no business being there in the first place since she seemed neither artistic nor sociable. But now she was dead, and I was locked in the basement until the storm died down and the police could make their way across the heaving waters.

How had this happened? Where had things go wrong? One moment there was as much comradery as a hippie love-in, – and I should know, having been there and done that – the next, only fear, hatred, and this howling Northwest thunderstorm. I had lots of time for contemplation since it didn’t look like I would get out of here any time soon. 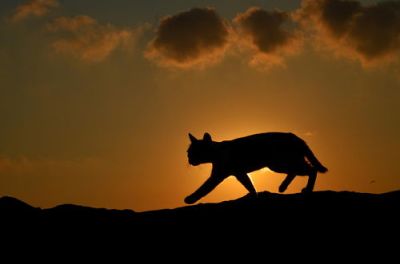 Cat at Sunset, by Serkan Sarikef