FOR THE LOVE OF STAR TREK, PART 1

One of the only television shows in “living” color, the weekly adventure of Captain Kirk and the exotic Mr. Spock was my favorite show. Flying through the stars, encountering wondrous civilizations spurred my imagination. That its storyline often took on the tough and controversial subjects of the times, such as prejudice, overpopulation, and what happens if you spoil an omnipotent brat, was lost on my 14-year-old mind but those parables have lived on long after Star Trek was canceled in 1969.

In 2001, I went to my first Star Trek convention. The idea of seeing the actors, the costumes, and the Trekkies fascinated me. I wanted to meet Leonard Nimoy. I thought the trip to Pasadena would be a one-time deal. Oh, how wrong I was! 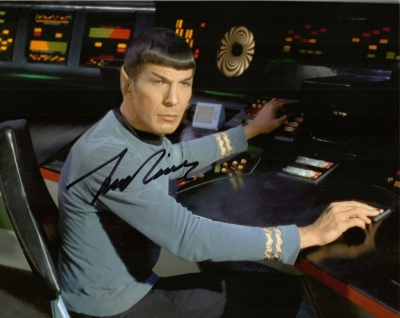 20 years and 22 conventions later, I’m still going. Yes, I dress up. Yes, I get my picture taken with the stars (over 100 come each year from the various Star Trek franchises). Yes, I collect memorabilia, but I quickly found my passion for autographed photos. I have one rule: they must be signed for me. Over the years, I have accumulated hundreds of signed pictures: 8×10’s of single actors; artwork posters of the casts; even photos I’ve taken myself. Many are matted and framed, limited only by the floor-to-ceiling space in my office workroom.

I have all the captains, of course: Bill Shatner, Sir Patrick Stewart, Avery Brooks, Kate Mulgrew, and Scott Bakula. I also have many well-known actors who can claim Star Trek in their body of work such as Peter Weller, Christopher Lloyd, Malcom McDowell, and Dame Joan Collins. Last week, I added Kirstie Alley, Whoopi Goldberg, and Neal McDonough. From the new movies, there is Zachary Quinto, Karl Urban, John Cho, Simon Pegg, and others. A sadly growing number of actors are gone now: Leonard Nimoy, James Doohan, Grace Lee Whitney, Mark Lenard (Sarek: TOS), Majel Barrett and too many more. I treasure their signatures. 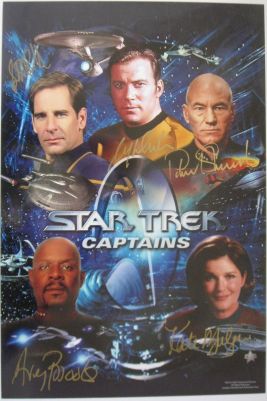 I regret that I did not see Gene Roddenberry, DeForest Kelley, or Anton Yelchin in person or have the occasion to get their autographs. I could buy them on line, but it’s not the same. That brief chance to talk to the signer, to ask a question, to thank them for their appearance and the impact they have made on my life, is unique. Yes, I stand in long lines for the privilege, but to me, it’s worth it. We spend so much time watching TV and movies, yet how often do we get to see those people in real life? And they are people, more or less like you and me.

Star Trek’s philosophy of acceptance and its vision of a better world are the reasons the show has endured, but the personal contact that the conventions provide are, in my opinion, why Star Trek continues.