9 YEARS SINCE MY LAST DRINK 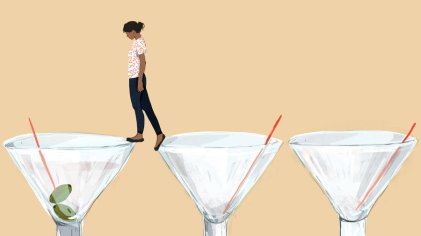 Quitting drinking is hard, and doubly so for alcoholics. First off we must detox, a painful, stressful, anxiety-causing process; then we have to change the habit. For those of us whose social persona is built on who we are when we drink, it’s terrifying to try to imagine what we’d be like sober. Changing a drinking habit comes as close to a personal suicide as one can get.

Routine is intrinsic to all of us. It’s what keeps everyday life from descending into chaos. Even if that routine is self-destructive, it is ours. It makes us feel comfortable. It allows us to go on to another day.

When an alcoholic gives up drinking, we throw that routine out the window, and the only way to survive the transition is to trade the drinking life for a better one. You would think that cutting out booze would be enough to achieve that better life – after all, our health is bound to improve and our social life will no longer be fraught with drink-induced arguments and humiliations – but unfortunately it isn’t that simple. Yes, some things will resolve naturally, but what do we do about the persona we have so carefully cultivated over the years? With what do we replace the drinking habit?

I see it as a little like quitting my morning coffee. Each day I wake up, get up, and zombie into the kitchen to make coffee. Over years of repetition, it’s become as natural and necessary as going to the bathroom. But if for some reason, I could no longer drink coffee – say I have anxiety or another medical problem which denies coffee– what then? Waking up, getting up, and zombieing into the kitchen for… nothing? Just to sit at the table and wish I had coffee? Visualize the cup, the brown steaming liquid, the pungent scent? That would be a recipe for crazy, and ignoring all repercussions, I’d be back at the Keurig, hands shaking, counting the seconds until I could feel the hot rush of bitter hit my throat and brain.

So I must replace coffee with a better choice, but here is the clincher – not just “better” but something I can love even more. It may take some experimenting. Maybe it’s a particular tea that when mixed with a spoonful of organic honey makes an enticing drink; not coffee, but potent in its own way. Maybe going for a morning walk or run isn’t the torture I’ve always believed it to be but actually fun and invigorating when done with a friend. There are a million choices, and finding what works is worth the time spent experimenting.

So it is with drinking. Once we’re detoxed, it’s time to begin the search for a life we can love more than drinking. It’s one day at a time at first – one hour – one minute. The urge to drink is insidious. “Cunning, baffling, and powerful…” as it says in the Big Book of Alcoholics Anonymous. But when we consider what has brought us to this place is usually of catastrophic proportions, there’s no place to go but up.

For me (and millions more), AA was the beginning of my answer. In meetings, I could, for one hour, join with others who knew my language. As I honestly shared my story, I gained new insight  into who I really was. It was a safe place where I could test run a new me. AA gave me real tools to help me deal with day to day; it let me find faith and my relationship with a Higher Power. I discovered potential I’d previously discounted because I was too fracked up to carry through. As the symptoms of alcoholism – the lying, cynicism, selfishness, and doubt – peeled away, I began to enjoy life again. (I’m not sure when the fun drinking morphed into merely drinking but it had been a long time.) I began to aspire to, and then accomplish, objectives I had never thought possible.

Today, September 6 2016, is my 9th “birthday”, meaning 9 years ago I took my last drink. Since then I’ve had ups and downs, like everyone. Such is life. But I am no longer unhappy. I have abundant blessings. I do things I am proud of. I have a sense of serenity, meaning I can face whatever comes my way. Sure, I wish I’d win the lottery or write a best-selling novel, but I can live “happy, joyous, and free” without those things.

For anyone who thinks they might have an addiction problem but don’t believe they have the fortitude to deal with it, I encourage you to believe.

I am a miracle.

And so are you.

11 Responses to 9 YEARS SINCE MY LAST DRINK