THE FACE OF ICARUS: A STAR TREK SHORT FICTION TRIBUTE

“Just like an Russian pugolovka,” Chekov mused. “I can’t see how he’s doing it.”

The three Star Fleet Officers, along with everyone else on the bridge of the USS Enterprise, stared at the viewscreen where, much as Mr. Chekov had described, an angular Vulcan form floated fish-like in the dense blue atmosphere of the uncharted planet. Spock was unencumbered by space suit or breathing apparatus, and by all rights, should be dead from the rarity of the atmosphere and the below-zero temperature. The fact that he lived was a miracle; the fact that he sailed free as a bird was nothing less than impossible.

“Anything, Lt. Uhura?” Captain Kirk threw over his shoulder to the brilliant and beautiful woman at the con.

“No, Sir,” she replied in dulcet tones. “Hailing frequencies are open, but there is no response.”

Kirk fisted the glowing amber button on his console.

“Scott here,” came the heavily accented voice of the engineer.

“Have you finished configuring the transporter?”

“Not yet, Sir. It’s no easy task to realign the pattern buffers to conform with yon alien aerospace.”

“Do what you can, Scotty. But do it fast. We’re running out of time.”

“I canna change the laws of physics, Captain!”

Clicking off the intercom, Kirk turned pleading eyes on Dr. McCoy. “Bones, what’s happening to him out there?”

The doctor shook his head. “Darned if I know. His insides should be turning to jelly and his eyes popping out of his head, but something’s keeping that from happening.”

“Dammit, Jim. I’m a doctor, not a parapsychologist,” McCoy scoffed.

A whisper of breeze brushed Kirk’s sweating face and he caught the scent of alstroemeria. “Yeoman.” Kirk smiled, in spite of the dire situation.

“I brought you some coffee, Captain,” said the flaxen-haired Rand.

With a nod of thanks, Kirk took the cup. Swigging down a burning gulp, he grimaced and passed it back into her waiting hands.

The turbolift doors wooshed open and a tall blue-uniformed woman came onto the bridge. Nurse Christine Chapel, with her fragile beauty and perpetual air of sweet sadness, stared at the viewscreen, at the languid figure of Mr. Spock. Her affections for the Vulcan were one-sided and she knew it, but that didn’t – couldn’t – change the way she felt.

“Oh, yes, he’s alive, though I don’t for the life of me see how,” groaned the doctor. “Is everything ready?”

“Sick bay is prepared to receive him, once he…  If he…” Her voice broke.

Spock was aware of his surroundings: the blue on blue of the atmosphere, the tiny flickers of photonic action that silently sparked all around his body. That was what kept him alive, he surmised. He understood the tenuousness of his situation, how unviable it was for him to be where he was, how he was. His logical mind railed against the absurdity, yet another part of him rejoiced. This was freedom as he had never known it before. And not just the freedom of his unfettered body but freedom of his mind as well. For the first time in his long life, the relentless war between his logic and his baser self, his Vulcan ancestry with its emotional overload that nearly annihilated his entire race, was silenced. He was at peace.

Yet even in his altered state, he knew the peace could not last. As joyous as the tranquility was, it was still a prison, and a prisoner’s first obligation is to escape. This was no exception. He must throw off that velvet embrace and return to his ship with the information he had gathered about the planet’s strange inhabitants. From what he could tell, they were a race of amorphous empaths. Maybe if he communicated with them, they would set him free.

My mind to your mind, he began. My thoughts to your thoughts…

“I’m getting something, Captain,” Uhura exclaimed.

Kirk made it to her side in two long strides. “Put it on speaker,” he commanded.

Uhura adjusted her earpiece and touched the brightly lit panel in front of her. A burst of static whined throughout the bridge.

“There is quite a bit of interference,” Uhura reported.

Kirk strained to hear through the buzz, anything.. a word… a sigh. And finally there it was: a voice, robotic and tinny yet definitely that of Spock.

Kirk leaned in closer. “Can you clear it up, Lieutenant?”

A few bursts of earsplitting noise, then the noise tuned out, leaving only the voice. Four words, repeated over and over like code: 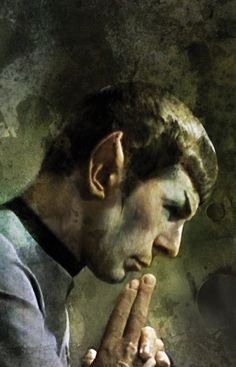 “Beam me up Scotty…”