“A young woman’s murder causes the subjects of a century-long mission to populate a new world to question the true nature of the project as they approach the point of no return.”

I just finished watching the Sci-fy Channel miniseries Ascension and enjoyed it but…WTF?

Here’s the plot: Back in the 60’s, a group of scientists head up an ultra-secret mission to colonize a far-away planet, thereby saving a hell-bent human race. Since this isn’t Star Trek, the journey is multi-generational: travelers will be born and die without ever touching earth.

50 years into the mission, things start to go wrong. The microcosm, which has morphed into a blend of Father Knows Best and Connery’s James Bond, live structured lives from the moment they are born. Class conflicts arise between the lower decks and the higher echelon. The smart and cute XO Aaron Gault (Brandon P Bell) was born into those lower ranks, a fact the privileged never let him forget.

Of note is a stable of sexy stewardesses run by the captain’s wife Viondra Denniger (played wonderfully by Tricia Helfer). Their purpose is to please the male population while furtively gathering secrets to promote Viondra’s and her husband’s  position. The captain is an ineffective man who has no clue his wife runs the show. Because it’s an extremely limited environment, the interaction between characters takes soap opera to a whole new level.

The plot weaves, becoming Alice-like: curiouser and curiouser. People are put to the test; a child holds a mysterious power; the experiment itself has facets only known by a few. Stuff happens; there is sex and violence; running and hiding; accidents, explosions, and general mayhem. The storyline leads ever deeper, becoming ever-more intriguing until…

No spoilers here, but I will say Ascension left me with the feeling one gets when a show is canceled without notice and the writers have to scramble to find a plausible end to a story meant to go on much longer. 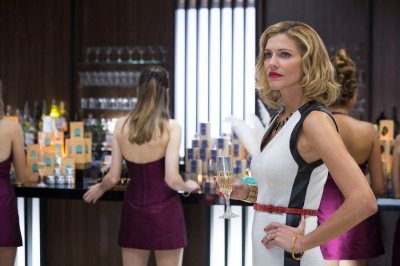 The costumes are exquisite, capturing an evolved Kennedy-era stylish opulence. The sets are detailed, true to the early 60’s or what might have evolved out of that period in the space ship’s half-century stasis. In spite of loose ends, it was a fun piece of sci-fi. I think I’ll probably watch it again and see if I may have missed something. Let you know.