In a world replete with greed, betrayal, sexual intrigue and rivalry, “Marco Polo” is based on the famed explorer’s adventures in Kublai Khan’s court in 13th century Mongolia. —IMDb

Violent, stunning, brutal, the Netflix production of Marco Polo is not for the faint of heart. It begins with a mesmerizing set of ink-wash credits, and moves quickly into merciless deaths and gruesome dismemberments, steamy silken sex scenes, and an opulence not seen in today’s world, even in the richest of places. The detail is so vibrant and real, you can almost smell the horse shit and spices that pervade the ancient streets. Costumes and sets are beyond extravagant in their tiniest elements. When they’re not loping of heads and other various body parts, the scenery is a feast for the eyes.

Lorenzo Richelmy, the young Italian actor who plays Marco Polo, is also a feast for the eyes. It is the job of his character to tie all the many plot threads together and create a believable world, which he does well. Benedict Wong is powerful as Kublai Khan, and Tom Wu’s Hundred Eyes, the blind warrior monk, is nothing short of transcendental., Prince Jingim (Remy Hii) is hot, as is his nemesis, the dark-souled Ahmad (Mahesh Jadu). Polo’s women are, of course, gorgeous, wily, and versed in the art of deception among other, softer arts, but I prefer the men.

Blood-baths, sword play, haunting music; intrigue and betrayal. Is it history? Probably not. Is it thought provoking? Certainly. Season 3 has yet to be confirmed, but I’m ready to re-immerse myself in a period of history in which I would never want to live. 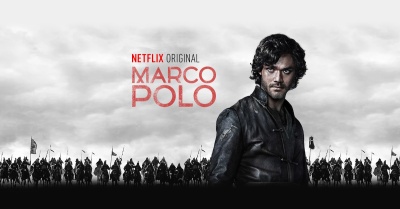 Be sure to check out Marco Polo: One Hundred Eyes (TV Short 2015) which tells the story of Khan’s assassin, Hundred Eyes.

“Before he lost his sight. Before he pledged his service to Kublai Khan. Hundred Eyes saw what made him into the deadly assassin who trains Marco Polo.”