These are lookalikes and wanna-bees, the hopeful television extras working their way into an acting career. How did I get here? I don’t look like an actor. I don’t belong.

I’m standing by a Wilford Brimley playing my husband. The square black lens of the camera stares at us. I smile, laugh, turn, clap, follow the director’s instructions. I hug the star of the show. I shift on my feet. They ache; I’ve been standing for six straight hours. So far.

How did I get here? I don’t belong.

I’m not like the other extras. If anything, I look more like the crew, the production assistants, electricians, make-up people, the script supervisor with her long gray artless hair. 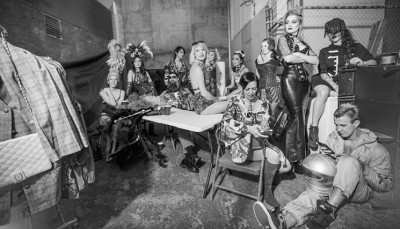 How did I get here?

How can that camera be on me?

I worry. When will they figure out I don’t belong? Can’t they tell I’m not one of them? But the show comes out and there I am on the small screen in all my scruffy-haired, yellow-teethed, acne-scarred, sixty-five-year-old glory. How could they have missed my homeliness among all that made-up beauty?

I laugh, feeling like I’ve gotten away with something. Like I’ve put one over on society. There is so much emphasis on looks, body, and style, especially among women. For me to be on television, even as background, is highly amusing. It’s a protest against all who say we have to look a certain way. It’s empowering for those like me who don’t belong.

Writing is where I belong. I feel completely at home in front of my computer making up tales. But the stories don’t come from vacuum; I use personal experiences to give them realism. In the case of Cat Call, my next Crazy Cat Lady mystery, I take my television background work, add some cats, and there you have it.

Cat Call takes place on the film set of a TV pilot. Lynley finds herself in the guise of cat handler after a friend suffers a bizarre accident on the set. Lynley knows little about cat handling for television, but the two actor cats, Cary Grant and Clark Gable, are well-trained in their parts. Lynley begins to think she might just pull it off when other complications begin to loom. Weird things are happening and there are rumors that a mysterious “hex” is sabotaging the show. When the mishaps give way to murder, Lynley decides to take the cats and get out, but her last day turns out to be more final than she could ever expect.

(As well as my background experience, I’m applying my short stint as an assistant cat handler for the cult classic, “Zombie Cats From Mars”.)

Note: The real draw to doing background work is my fascination with behind the scenes. I grew up with a mother who dabbled set design for amateur theater. What it takes to build the story that the audience finally sees is nothing short of magic. That magic is a well-guarded secret however. Like any magician, the dream-spinners don’t want us to see how their tricks are done. To be honest, most people don’t care. They just want to be entertained, happily suspending disbelief. They don’t want to know that the Star Wars universe is a big green screen or that a Phaser is plastic, cruder even than a the toys manufactured in its image. Aside from the occasional blooper reel, they don’t want to see actors flub their lines or break character, and heaven forbid they are faced with the scene between takes, when the cast waits, blank-faced and tired, for the lighting to be changed or the set to be adjusted or whatever whim the director comes up with to create that perfect shot.

It takes many, many hours to film a piece that may last only moments of time. A lot of background work is cut or edited. Good thing I’m not in it for the glory. I’m there to see how it’s done, and to play my little prank on the world, in a place I don’t really belong. 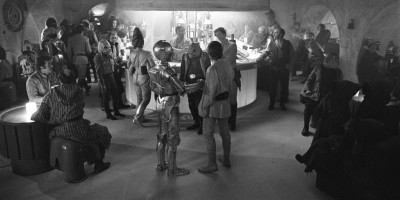 5 Responses to ON LOCATION RESEARCH FOR CAT CALL, A CRAZY CAT LADY MYSTERY #4