CATS AT COMIC-CON: Part 1, The Art of the Cat

Last weekend I went to Rose City Comic-con. I attended mainly to catch the celebrity guests David Tennant from Doctor Who and the Star Trek Next Generation trio, Michael Dorn, Marina Sirtis, and Gates McFadden. I enjoy seeing the stars I watch on television close up and personal. For the most part, I’ve found them to be gracious, funny, and human.

I’ve been to many sci-fi/fantasy themed conventions, so I knew what to expect when it came to the panels; what I didn’t plan on was the abundance of cat-related material I found among the exhibit booths as well as the con-goers. From a guy who called himself Captain Cat to beautiful art and illustration to graphic novels, I discovered cat-centric themes just about everywhere I looked.

In this three-part blog, I’ll share my fun sightings of cat-themed art, cat-themed merchandise, and cat fans, proving once again, you never know what can happen at a comic-con.

GHOST CATS BOOKS – Canada. Brian FH Clement, seen here, writes the text and Arinn Westendorf illustrates these small booklets with sweet line drawings. The stories are gentle and ethical, nice for all ages. Who wouldn’t want their departed kitties to come back as a ghostly guide?

Braden Duncan loves black cats. Her artwork (a.k.a. Clockwork Art) is inspired by the intricate elegance created by the convergence of biological & mechanical elements.

“As our lives become increasingly mechanised & electronified, humans & animals must adapt to survive. Braden’s pieces represent organic beings enhanced for their new roles in a bio-industrial world. With watercolour & oil, Steampunk & circuitry, she aims to reshape the world with the strange & the adorable.” 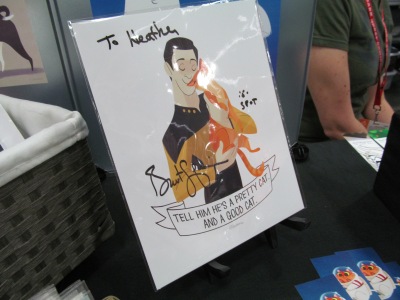 Of course I loved the work of HEATHER NESHEIM, especially her two Star Trek pieces, Spock with the black cat from “Assignment, Earth” and Data with Spot (signed by Brent Spinner!)

NATALIE METZGER of Fuzzyslugstudios paints many things besides cats, but I couldn’t pass up this fuzzy fellow. (I think it’s a cat.)

I love this fine woodcut print by Celia Connaire (@BHDemon) called “Cat in a snapback.”

Another cat story writer and illustrator, Abby Denson shows off her book and her great cat scarf. She writes, draws, travels and much more. Her time spent in Japan has influenced her art style. 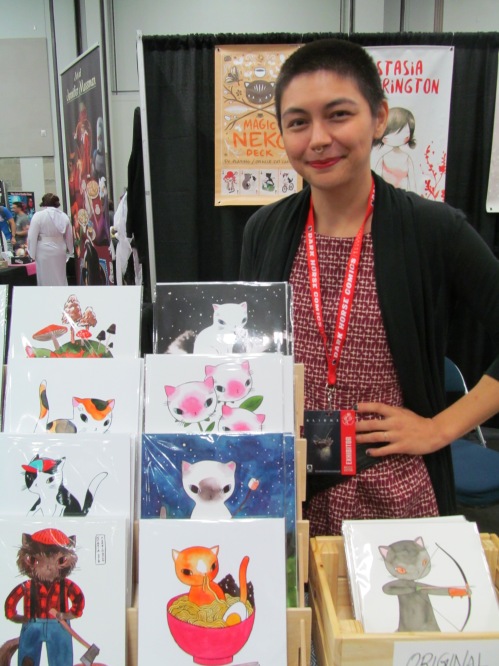 More Japanese influence is seen in the art of Stasia Burrington. (The Japanese love thieir cats!) Her original illustrations are simple, whimsical, and pleasing to the eye. I’m interested in checking out the Magic Neko Deck of “oracle cat cards”! 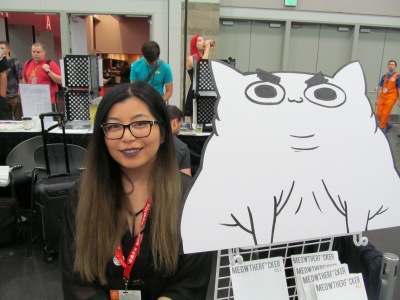 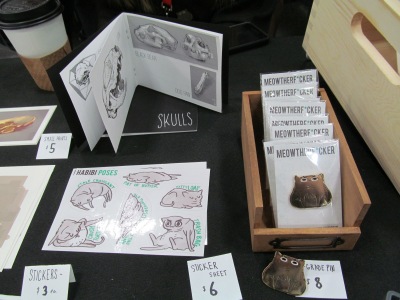 Cindy Liu is a concept artist and illustrator. The big guy on the left is Habibi the cat, who manifests as all sorts of things including a tee shirt that I really want to get. Habibi is an Arabic word which means “my love”.

Thank you, Rose City Comic-con, for featuring these and many other local and regional artists. It was so nice to have something to look at besides manufactured merchandise.

But speaking of merchandise, there was some great cat stuff there too. Check it out in my next blog post, CATS AT COMIC-CON: Part 2, The Merch.

14 Responses to CATS AT COMIC-CON: Part 1, The Art of the Cat