THERE’S MORE TO CAT CAFÉ: Copeland Cat and the Concatenated Order of Hoo-Hoo

The 5th Crazy Cat Lady cozy mystery finds sixty-something cat shelter volunteer Lynley Cannon confronted by the murders of some very senior citizens, including the elderly owner of the Blue Cat café, a schoolmate and friend of her mom Carol. Could Carol could be next on this deviant killer’s list?

When I was a kid, my family would drive the old Chrysler out to our place in the country. One of my favorite parts was going by a big Halloween-orange building with a black cat insignia on its front. I loved cats and thought this depiction of the cat had been painted just for me.

The building was Copeland Lumber, and their cat, the symbol of the Concatenated Order of Hoo-Hoo. Hoo-hoo who, you say? We will get to that in a minute.

Current Copeland’s in Florence, Oregon. The building’s not orange anymore but the sign still is.

Turns out that Carol Mackey, mother of Lynley Cannon, the hero of my Crazy Cat Lady cozy mysteries, liked it too. In Cat Café, the most recent installment of the series, Carol recalls how, back in 1950 when she was seventeen, her little group of friends was quite taken by the symbol. They even referred to themselves as the Black Cat Gang, and though they may have been a bit rebellious, they were wholesome compared to what we consider a gang these days. They enjoyed innocent pastimes like taking the truck out to the lake and listening to records on a battery-run record player. Here is what Carol told Lynley about her exploits way back when:

“Sometimes we’d drive off into the boonies and drink beer. We thought of ourselves as a sort of a club, or a gang. We even had a name. Can you guess what we were called?”

She looked at me mischievously and tapped her finger on the Copeland logo again. “I’ll give you a hint.”

“Does it have to do with that cat? That black cat?”

She laughed. “Terrance was the know-it-all of the group, what you might today call a geek—or is it a nerd? I get the two mixed up. He would have loved the internet if they’d had it back then. As it was, he practically lived at the library, the Google of the olden days.”

Carol set the photo down and leaned back into the brocade cushions.

“Terrance had read that Copeland Lumber’s black cat logo was derived from the mascot of the IWW, Industrial Workers’ of the World. The mascot cat, sometimes referred to as the ‘sabo-tabby’, had originally been code for sabotage, wildcat strikes, anarchy, disorder, and chaos among the labor force. We, being a batch of precocious kids who considered ourselves somewhat on the rebellious side, liked the idea that Rorie’s dad’s work truck was a secret symbol of anarchy, so we began calling ourselves the Black Cats. Of course later on I found out that the Copeland logo had nothing to do with anarchy—it was the emblem of the Concatenated Order of Hoo-Hoo, a fraternal organization whose members were involved with the forest products industry. The anarchists did have a black cat logo, but it was slightly different. The anarchist tail is fluffed out and the Hoo-Hoo’s tail is curled. I can see how one might make the error.” 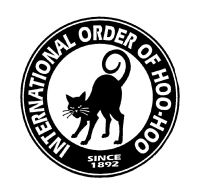 “You never told me you were a rebel.”

“And let you think you could get away with being one yourself?” Carol exclaimed. “You were enough of a free-thinker as it was without any influence from me.”

“Well, it sounds like good fun in any case.”

So now you know all about the Copeland Cat and the Concatenated Order of Hoo-Hoo. You’ll need to read Cat Café to find out what Carol means by “…how it ended.”