MY CWA AWARDS AND THE STORY BEHIND THEM 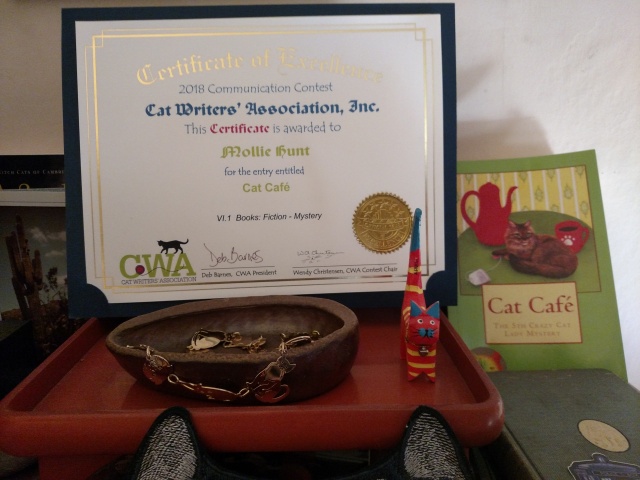 For a writer, winning an award is an amazing gift. Though most of us love our stories and would write them even if no one ever saw them or read them, such acknowledgement is very satisfying. It validates all those isolated hours spent inside our heads, because deep down, many of us think our obsession with writing is a little crazy.

I just won two Certificates of Excellence from the Cat Writers’ Association: one for my latest Crazy Cat Lady cozy mystery, Cat Café, and one for my book of cat poetry, Cat Poems: For the Love of Cats. I submitted two other entries that did not earn a COE, but the judging is stiff, and I trust there was a reason the judges didn’t consider those works good enough to win.

The COE is only the first step in a two-part award cycle. For the COE, works are judged on their own merits and not against others in the category, but for the second round, all the COE winners will compete against each other. A single entry will be awarded the coveted CWA Muse Medallion at the conference coming up in May. I have been the recipient of Muses in the past, and that honor is nothing short of wonderful. Wish me luck. I’m up alongside some other remarkable and accomplished writers.

There is a story to tell about how I came to be a member of the Cat Writers’ Association. It began many years ago when I was first writing. I had managed a few mysteries but was beginning to realize I wanted to write about cats, so I began the Cat Seasons Tetralagy, four sci-fi fantasy books where cats save the world. I don’t remember how I heard about CWA— probably from my own reading favorites such as Shirley Rousseau Murphy’s Joe Grey series— but I was greatly intrigued. I knew that if I could join this cat-centric organization, my future in cat writing would be assured.

Back in those days, self-publishing in its current incarnation hadn’t sprung into being, and I was at the mercy of publishers and agents. Any of you who went this same route remember the double bind: publishers only want you if you had an agent; agents only want you if a publisher had agreed to take the work. It was frustrating but I didn’t really care— I’d just start writing another book and forget all about what was supposed to happen to it when I was done.

But in the back of my mind, I wanted something other than a portfolio of rejection slips, no matter how many Steven King and J.K. Rowling had racked up before their eventual fame.  I really thought the Cat Writers’ Association could give me the cred I needed to succeed. The only problem was, to become a professional member, I needed to have published work.

I knew it was easier to publish a short story than a book, so I decided to write one. Trouble was, whenever I began to write, my plot turned into seventy-five-thousand words, not twenty-five-hundred. But I buckled down and did it. It was exhausting trying to cram all my ideas into such a small space, but I did it. I liked the result and sent it out to magazines.

In fact, I still didn’t get picked up, and I soon moved on to writing more books. Sometime later, I did manage to get enough cat writing under my belt to qualify for CWA. It’s been a wonderful experience and has lived up to all my hopeful expectations and more. Thank you CWA, and see everyone at the conference!

18 Responses to MY CWA AWARDS AND THE STORY BEHIND THEM