IT WAS THE THIRD OF JUNE, ANOTHER SLEEPY, DUSTY DELTA DAY…

It was the third of June, another sleepy, dusty Delta day.

I was out choppin’ cotton and my brother was balin’ hay…

Today is June third, and when an online friend posted those lyrics on Facebook, the enigmatic ballad came back to me as if Bobbie Gentry were singing through my phone. It’s been more than 50 years since she produced the haunting song that had a whole generation wondering: What did Billy Joe Macallister really throw off the Tallahatchie Bridge? Half a century later, I figured it was time to find out. With the help of the internet, many of the mysteries of my youth have been solved. I was sure the answer would be there.

But it wasn’t. Though speculation ran from flowers to a baby, no one had ever got Gentry to commit. In 1976, a film was made based on the song, it’s interpretation including a homosexual theme. Herman Raucher, the screenplay’s writer, asked  Bobbie Gentry about the song:

“I said, ‘You don’t know why he jumped off the bridge?’

The web wasn’t a total loss, however. As I surfed on, I discovered something even more intriguing: The meaning of the song itself. 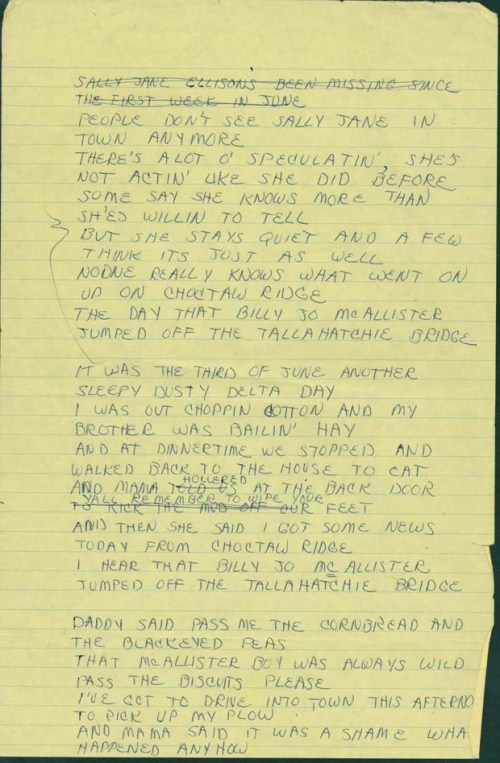 Recently a handwritten page of Gentry’s original lyrics had been found. It began with a verse she never recorded and with the first line crossed out.

Sally Jane Ellison’s been missing since the first week in June.

There’s a lot o’ speculatin’, she’s not actin’ like she did before.

Some say she knows more than she’s willin’ to tell.

But she stays quiet and a few think it’s just as well.

No one really knows what went on up on Choctaw Ridge

the day that Billy Jo McAllister jumped off the Tallahatchie Bridge.

In the published lyrics, Sally Jane became the unnamed female narrator who was only present with Billy Joe throwing something off the bridge. What it means has more to do with the nature of the ballad than the story.

The story itself has so many dramatic elements— Billy Joe’s apparent suicide and the bridge-tossing mystery— that its true meaning was lost on the youth of the mid-sixties, as it has been lost ever since.

“The song is nominally about Billie Joe McAllister’s suicide, but no informative details of the suicide ever emerge.  Instead, we only learn about the suicide indirectly from a narrator who hears bits and pieces emerge in between mundane dinner table —conversation between Mama and Papa.  But the whole point is that Mama and Papa’s dinner table conservation will never help you solve the mystery, because Mama and Papa not only don’t know enough about Billy Joe McAllister to answer that question, they simply don’t care.” — Jon Pennington

So here is the real deal:

It doesn’t matter what they threw off the bridge. More ominous than Billy Joe’s suicide, more menacing than the couple throwing something off the bridge, more heartbreaking than the lonely narrator picking flowers up on Choctaw Ridge is the blatant apathy of the family to the tragedies going on around them. The true theme of the song is indifference.

“The song is a first-person narrative that reveals a Southern Gothic tale in its verses by including the dialog of the narrator’s family at dinnertime on the day that “Billie Joe McAllister jumped off the Tallahatchie Bridge.” Throughout the song, the suicide and other tragedies are contrasted against the banality of everyday routine and polite conversation.” —Wikipedia  https://en.wikipedia.org/wiki/Ode_to_Billie_Joe

It was the third of June, another sleepy, dusty Delta day

I was out choppin’ cotton and my brother was balin’ hay

Papa said to mama as he passed around the blackeyed peas

“Well, Billie Joe never had a lick of sense, pass the biscuits, please”

Mama said it was shame about Billie Joe, anyhow

And now Billie Joe MacAllister jumped off the Tallahatchie Bridge

And wasn’t I talkin’ to him after church last Sunday night?

“I’ll have another piece of apple pie, you know it just don’t seem right”

“I saw him at the sawmill yesterday on Choctaw Ridge”

Mama said to me “Child, what’s happened to your appetite?”

“Said he’d be pleased to have dinner on Sunday, oh, by the way”

Brother married Becky Thompson, they bought a store in Tupelo

There was a virus going ’round, papa caught it and he died last Spring

And me, I spend a lot of time pickin’ flowers up on Choctaw Ridge

And drop them into the muddy water off the Tallahatchie Bridge. 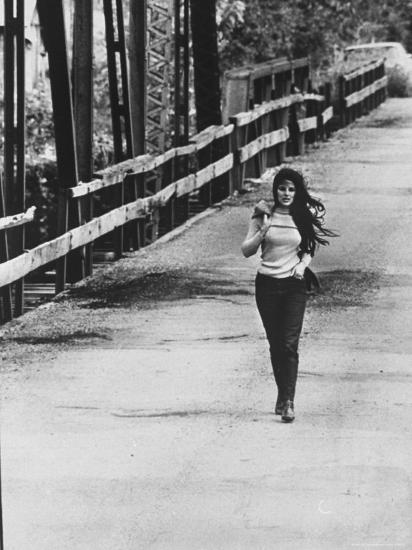 In this photograph from the November 10, 1967 issue of Life magazine, Bobbie Gentry strolls across the Tallahatchie Bridge in Money, Mississippi. The bridge collapsed in June 1972.

19 Responses to IT WAS THE THIRD OF JUNE, ANOTHER SLEEPY, DUSTY DELTA DAY…