iAmMoshow Does It Again! 40K For Cats! 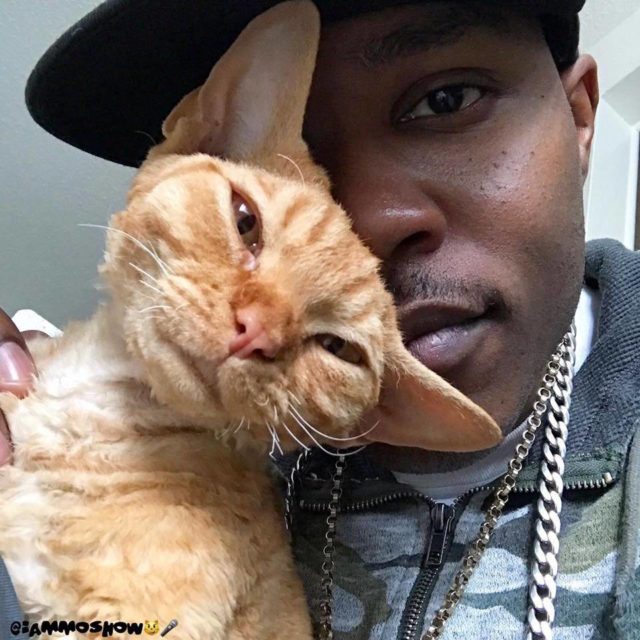 Who doesn’t love National Cat Day? Of course we know that to cat people, every day is Cat Day, but it’s fun to pull out all the stops with an extra special celebration once a year. And this October 29th, something wonderful did happen for two cat shelters, one of them right here in my home town!

You may remember that about a year ago I interviewed Portland’s one and only cat rapper, iAmMoshow. He had done a video for Arm & Hammer, who had in turn pledged a huge donation to Mac’s Fund if the video got a million hits. This year they did it again, and one of the benefiting shelters was our own Cat Adoption Team in Sherwood, right outside Portland. If Moshow’s video got 2 million hits in the prescribed time, Arm & Hammer would donate $10,000 each to CAT and another shelter, ACCT Philly in Pennsylvania. The video far exceeded expectations, with 8 million hits, and here’s the surprise:

Thanks to fans who watched the video 4x more than the goal of 2 million views, ARM & HAMMER™ shocked Cat Adoption Team in Oregon and ACCT Philly in Pennsylvania with an extra $20K. 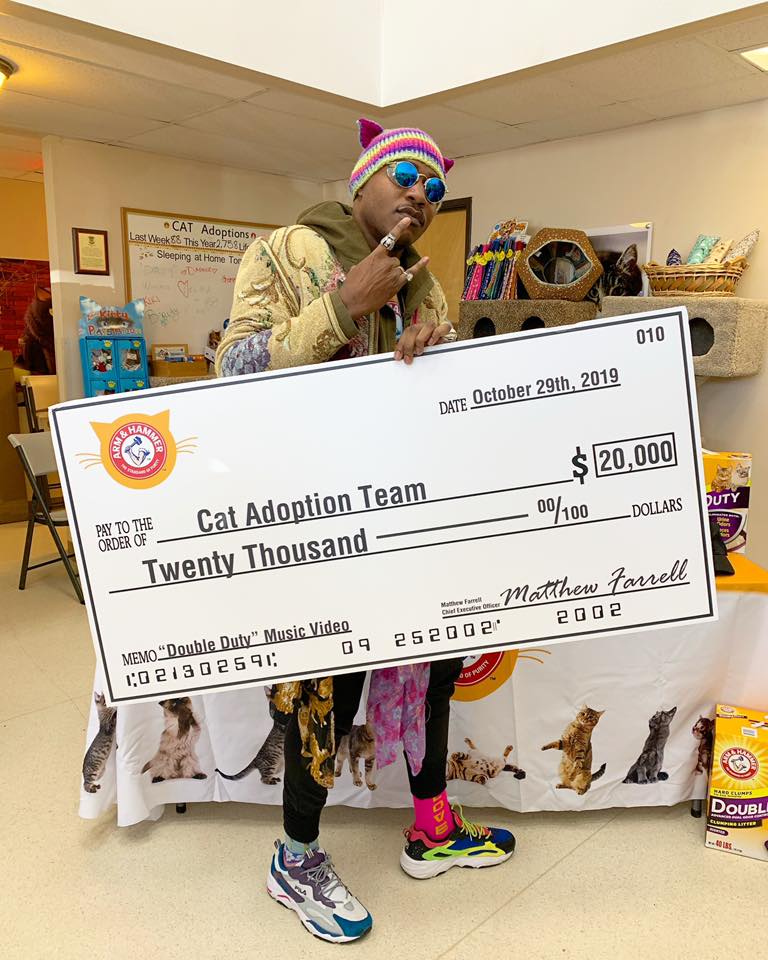 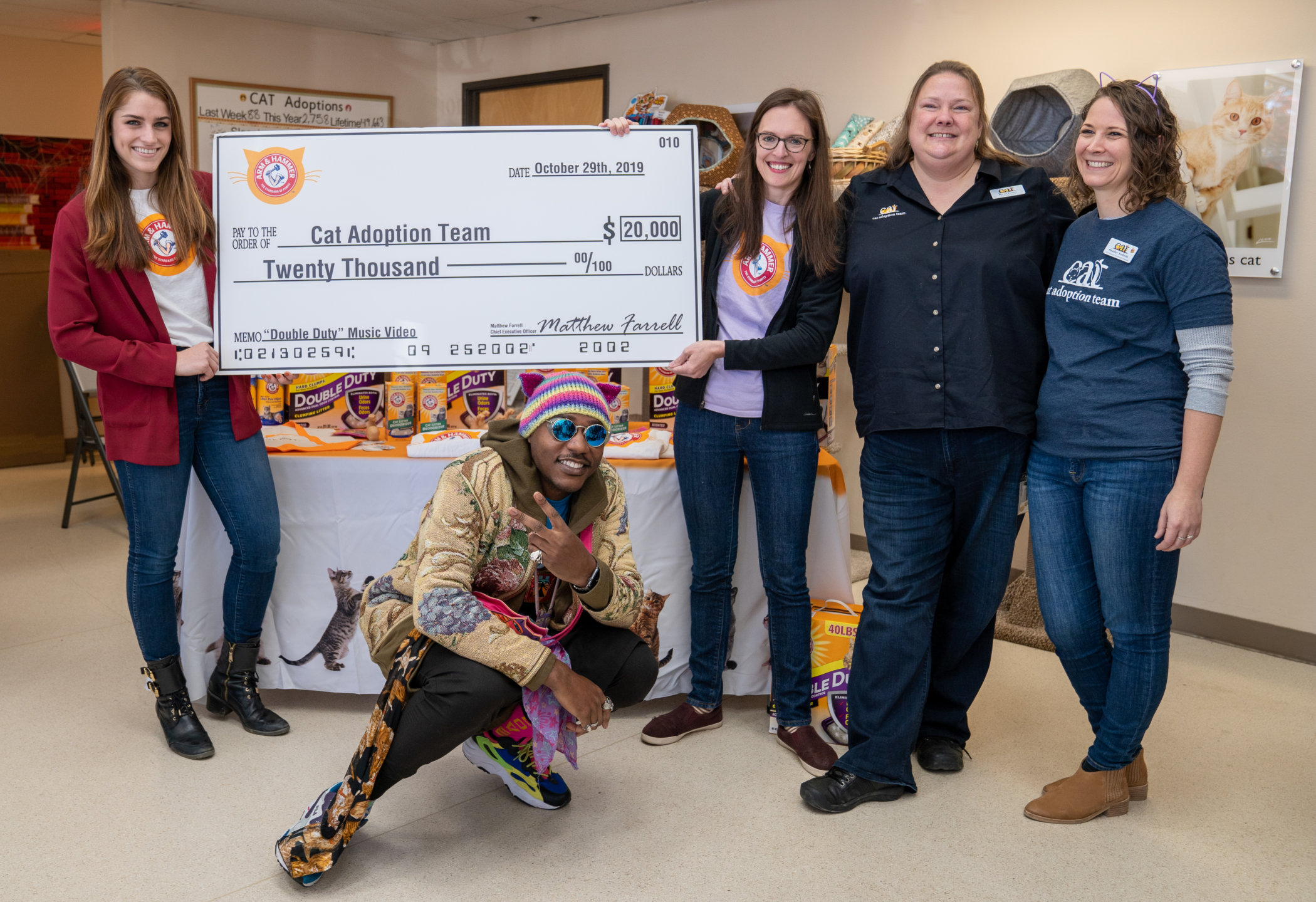 In July, ARM & HAMMER™ and iAmMoshow released “Double Duty” in hopes of generating excitement for cat owners, inspiring fans to help their local community cats and ultimately giving more power to all cat lovers. Thanks to all the fans who watched and shared the video, CAT and ACCT Philly received an additional $10,000 for a total of $20,000 each to help fund their efforts of keeping community cats safe, healthy and able to find good homes for adoption.” 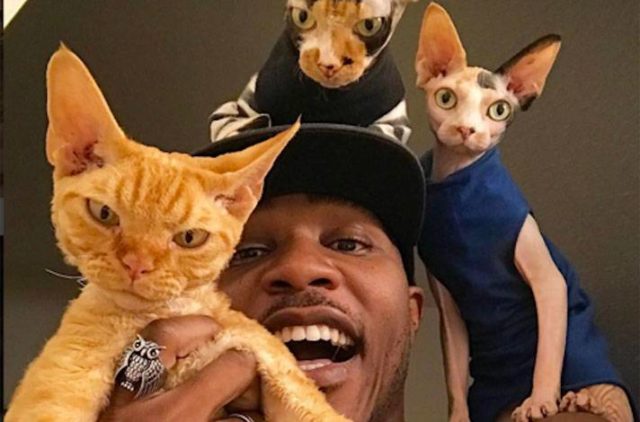 Lets give a special thank you to Moshow, who donated his time, energy, and love to this unique project. That man is one of the hardest working people I know, and he is all about cats! Though I was unable to attend the donation ceremony at CAT last Tuesday, I did get to see Moshow preform at Pop Cats a few weeks ago. The energy in the room was amazing! He seems to bring out the best in people with his unabashed positivism. Thank you, Moshow! We love you!

About iAmMoshow, The Cat Rapper™iAmMoshow is the internet’s premiere Cat Rapper. Born and raised in inner Baltimore, MD, he combined his passion for rap and cats to defy the odds and build a name for himself. Some of his most popular songs include Cat Bath Rap, Cat Emotions and Cat World and has three albums available on YouTube, Spotify, Google Play, Amazon Music, Deezer, Apple Music and iHeartRadio.

Currently living in Portland, OR, with his 5 cats – Black $avage, Sushi, Lil Parmesan, MegaMam, and Ravioli – iAmMoshow is on a mission to inspire the world, sharing with others the lessons he has learned, to not give up on yourself and follow your dreams, no matter where they take you. To learn more, check out www.facebook.com/iammoshow and follow @iammoshow on Instagram. Don’t forget to tag #BeautifulCatLadyWednesdays.

About Cat Adoption TeamCat Adoption Team (CAT) is the largest cat shelter in the Pacific Northwest. We offer adoption, foster care, and veterinary services to homeless cats and kittens. With over 20 years of experience and nearly 50,000 adoptions, we know cats! While in our care, cats and kittens have access to enrichment activities, behavior modification, medical care, and a variety of housing options to meet their individual needs.Through our carefully supervised adoption program, more than 3,200 cats and kittens are adopted into loving homes each year.

8 Responses to iAmMoshow Does It Again! 40K For Cats!