What if a retired cat-lady found a stolen sixty-eight carat chunk of trouble in her back yard pond?

It’s been a tough month and a half. Here we are, May 89th, with very little sign the world will be normal any time soon. I, for one, could use some good news. That’s why I have created a 5-day book Giveaway on Amazon.

From Sunday, May 10th to Thursday, May 14th, Cats’ Eyes (Kindle version) is free! Cats’ Eyes is the first of the Crazy Cat Lady cozy mystery series featuring Lynley Cannon, a fifty-something cat shelter volunteer who finds more trouble that a cat in catnip.

…an outstanding amateur sleuth mystery that will delight cat lovers and mystery lovers alike. Cats’ Eyes has so many exciting twists and turns; it keeps the reader fascinated until the final thrilling scene. I liked the addition of “cat facts” at the heading of each chapter. I learned a few fascinating tidbits that I didn’t know. —Readers Favorite 5-Star Review 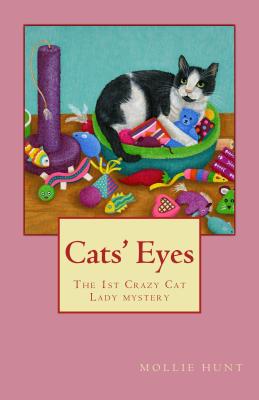 Lynley Cannon is the crazy cat lady, but she’s not quite crazy yet, though a bizarre connection to a bumbled heist and a double homicide has got her wondering.

Lynley usually enjoys her old Portland home with her clowder of rescue cats, but when elderly Fluffs drags in a dusky brown beach agate that turns out to be a priceless chocolate diamond, things change fast. The uncut stone, one of a pair called the Cats’ Eyes, has been stolen from its wealthy owner, but how it ended up a cat toy, even the robbers cannot guess.

Threatened by theft, kidnapping, and murder, Lynley is determined to maintain her serenity, even if it means finding the crooks herself. With the police completely baffled, friends, family, and a hunky humane society investigator come on board to help.

The killer, convinced that Lynley has the diamonds, is prepared to go to any lengths to get them back. Will Lynley live to clean the litter box another day? 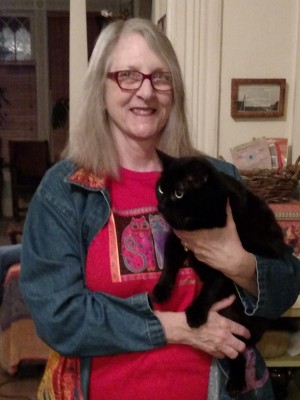 My name is Lynley Cannon and I am the crazy cat lady, only I’m not crazy yet. I swear. Everything I say is true, though it may seem like the wildest fiction. It does to me, now that I look back, starting when Fluffs discovered the stone. But I’m getting ahead of myself. How are you to know what led up to that unfortunate find or its dire consequences? Why, at the time I didn’t even know myself and could never have guessed.

I am fifty-eight years of age, and life in the slow lane has been pretty serene. Quietly happy, or happily quiet, whichever you choose. I’d had a good run in my youth—sex, drugs, rock ’n’ roll—but I was over it. Too much trouble. Too much drama. I have better things to do.

Which brings me to the cats. I don’t know where I got the reputation of being a crazy cat lady; I only have seven in my care at the moment. And two aren’t even mine but fosters from FOF, Friends of Felines, the shelter where I volunteer. One is named Addison and he’s here to recover from a kitty cold. The other is Fluffs.

Fluffs’ is a sad tale gone good. Originally she came to me for a few precious weeks of hospice before she passed on. It had been so poignant, bringing home the dying cat, the scrawny gray with chronic kidney failure, to give her some last, best moments of TLC. But it soon became apparent that nobody had bothered to tell Fluffs her time was up. That was months ago and she’s still going strong.

Fraulein Fluffs isn’t the name I would have chosen for a cat, but it was the name she came with and at twelve-plus, there was no going back. I accepted her as she was, though I admit to calling her Fluffo when no one else was listening. She allowed the silly pet name as long as it was accompanied by affection and food. I treated Fluffs as the treasure she was. And then one day she found a treasure of her own.

Mondays are always busy. Through a quirk of fate, I’m retired, but I seem to be busier than ever. I’m finally doing all the things I used to think about when I was at work but never did because I was always too tired when I got off. That Monday was no exception. After yoga and a brisk walk around the park with the senior ladies, I spent some time on the computer compiling my Scottish heritage, the Mackey family tree. Got to get it all down before I pop off in case anyone’s interested. My daughter isn’t—Lisa’s too busy in the here-and-now—but maybe someday my granddaughter will take a break from her texting and her iPod and whatever else might be invented for sedentary self-gratification long enough to wonder where she came from. When that time comes, I want to be ready.

I was in the midst of a particularly difficult connection between a great-uncle and a third-cousin-once-removed when I heard a clink and then the clackity-clack of a sharp-sided object rolling across the hardwood floor. It stopped, then started up, then stopped again, creating just enough distraction to turn my attention from the quandary of my ancestors to the question of what was making the noise.

Cat toy, I thought to myself. But which one, and who was playing? Can’t be Red—Big Red was seventeen pounds of muscled tabby dynamite; when he played, he sounded like a dancing elephant. Dirty Harry, the black and white, didn’t play much anymore; he was getting on in years and preferred to sleep in his donut or his cupboard by the TV. And when Harry did sport around, it was with the little female, Little. Though Little, an all-black panther-shadow with daring yellow eyes, was half his size, they boxed and wrangled like tigers. Violet, who got her name from her gray-violet coat, didn’t play at all because she was what veterinarians call morbidly obese, which for us laymen, translates into as wide as she was long. Solo was just that: a singular beauty. White as a ghost, she lived an almost-feral life out of sight of human eyes. Addison, the fourteen-year-old black male I mentioned earlier, was in quarantine. That left only…

I tracked the enigmatic sound, not raucous enough to be the plastic bell-ball but too irregular to be the walnut. Down the stairs, through the hallway, and there she was, batting something small and glittery into a corner.

“What have you got?” I said softly as I crossed the room. When she heard me, she stopped dead in the middle of a serve and looked up with big, guilty eyes. Her paw covered the item, pressing it down with the gentle firmness she might have used on a baby mouse.

I bent over and scooped the object out from under her. Fluffs gave me a look that could have frozen fire and stalked off in the opposite direction.

“Fluffs,” I called apologetically but I knew it was no use. She was miffed, and then she was gone.

Shaking the thing in my hand, I felt the smooth, oily heaviness of stone. Opening my palm, I glimpsed it for the first time.

I’d like to say I had a premonition of fate at that historic moment, a frisson of expectancy, a sense of Things to Come, but I didn’t. My only thoughts on the brown agate with the dark slash through the center were How pretty! and then What’s it doing in my living room? since I didn’t remember having ever seen it before.

A jangle of electronic church bells rose from the direction of the kitchen—my cell phone. The stone still in my hand, I went to answer it. This proved more difficult than expected since it wasn’t where it was supposed to be: on the wooden tray by the real phone. The bell played merrily along, mocking me as I searched through my purse and rifled my coat pockets. Finally I found it under yesterday’s mail just as it clicked over to message mode. With a sigh I waited for the caller’s number to appear. When it did, I saw it was from the shelter.

I shot an alarmed glance at the Kit-Kat clock on the wall. Its switching tail and roving eyes confirmed my sudden fear that time had gotten away from me. My shift was about to start and I wasn’t even dressed yet. My apron was still in the dryer. I hadn’t even cleaned my own cats’ litter boxes, and here it was time to do the forty-plus trays at FOF!

Without another thought, I tossed the errant rock into a catch-all basket on the kitchen table and ran to get ready. Maybe if I had been paying attention, if I were better at multi-tasking, if the phone hadn’t rung right then, things would have turned out differently. 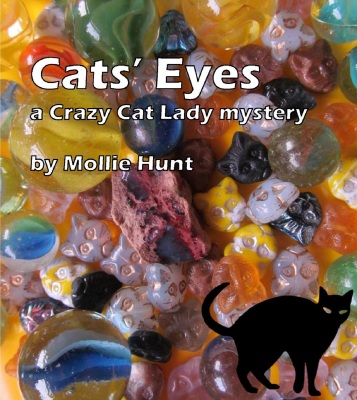