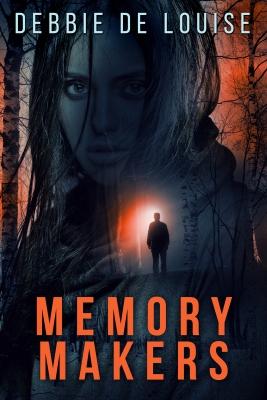 Twenty-five years ago, Lauren Phelps and her sister Patty were kidnapped from their backyard on Long Island. Lauren escaped her captor, but Patty was killed.

Ever since, Lauren has suffered from nightmares of the “Shadow Man.” Trying to recall his face and avenge her sister’s murder, Lauren, now a kidnapping investigator, enrolls in a clinical trial for a new memory drug.

Soon, Lauren becomes involved with a fellow trial participant who seeks to recall his own traumatic past. But can Lauren discover the identity of the “Shadow Man” before history repeats itself?

EXCERPT (In this scene, Lauren has taken a weekend leave from the clinical trial to go home to look for her missing cat, Harry. She is aided by, Rick, her kidnapping investigator partner.)

I sat down on the couch next to him. “Coffee looks like the last thing you need. Are you sure you’re up to looking for Harry?”

He pressed his thumbs together in a familiar gesture I recognized as nervous energy and tapped his loafered feet on my mother’s carpet. “I have to keep going, Lauren. It’s the only way. Corey’s been gone nearly two weeks. Chances are we won’t find him alive. Helping you out with your cat is a reprieve for me. I’ll sleep later when there’s time.”

“I’m sorry I left you with everything. It’s a lot for one person to deal with.”

I thought of mother’s words about his replacing me with another pretty detective. “Who?” I asked.

“John from vice. He’s been aching to get out of that department for a change.”

“Ah,” I couldn’t help the relief sounding in my voice. “Has he come up with anything?”

Rick spread his hands. The thumb twiddling stopped a moment. “Nada. No kidnap note or call. Whoever took Corey had another reason.”

Like me and Patty’s abductor. “You’ll find him,” I said, although I wasn’t too confident about that.

“In a ditch, most likely.” I saw the pain fill his eyes.

“You have to think positive. It’s the only way you’ll cope with this.”

He nodded. “I know.” His voice sounded hollow, the furthest thing from optimism.

Mother arrived with a tray containing coffee and an assortment of home-baked muffins she hadn’t offered me.

“Help yourself. You could use some fattening up.” She placed the tray next to him.

Rick didn’t argue but took a blueberry muffin along with a coffee mug. “Thank you.”

Mother smiled. “You’re quite welcome. Are you going to help Lauren find her cat?”

He bit into his muffin and took a sip of coffee. After he swallowed, he replied. “Yes. I hope to do that. Can you tell me the last place you saw him?”

I recognized that question from those we routinely asked the parents of missing kids.

Mother took a seat next to me and leaned over. I felt like I was in the middle of their conversation. “I came home from shopping. It was Thursday. I always shop for groceries on Thursdays. I usually tap the door when I come in to scare off the cats who gather near it. They always seem to know when I’m on the doorstep.” She wiped back a strand of gray hair that had fallen across her forehead. “Harry and Hermione were both standing there. I could hardly see over my packages, but I scooted them away with my foot. Hermione ran back, but Harry got around me. I put my groceries down and ran after him, but he disappeared.”

“In what direction did he go?”

“He crossed the street. I thank God no cars were coming. I thought he went into a bush in front of the Carson’s house.” She paused. “The Carsons are my neighbors, across the street an elderly man and woman whose grandkids come regularly to mow their lawn or do upkeep on their house.”

“Did you actually see him go in the bush?”

“Yes, but he never came out. I was afraid to go on their lawn. I hate to trespass on other people’s property. I rang the bell, but no one answered. Phyllis is hard of hearing, but Bert’s ears are still sharp as a tack. The blinds were closed, so I assumed they went out. I called Harry’s name, but he didn’t reply. I waited there a while, but he never reappeared.”

“Did you go into the bush?”

Mother seemed offended. “No. I told you I felt uncomfortable trespassing. I gave up and went home. I figured maybe he would come out on his own. Cats are like that. I kept looking for him through the window, but there was no sign. The next morning, the Carsons let me check their bushes, but Harry was long gone.” She sniffled as if the recounting had saddened her and then continued the story. “I asked around the neighborhood. I even had one of the kids down the block make up signs and put them on street poles. The signs had my number and a photo of Harry that Petey helped me get off my iPhone.” Petey was as knowledgeable about computers as most young people are today.

“Did you have any responses?” Rick prompted.

Mother shook her head. “None. That’s why I called Lauren.” She looked in my direction. “I thought Harry would come to her if she went looking for him.”

“That’s possible. We’ll take a walk around the neighborhood. He could be hiding somewhere.”

“He’s never been outside,” Mother added. “Thank you for helping. It means a lot to us.” She glanced again at me with a sly smile that hinted that what she was thankful for was Rick spending time with me.

This book will also be printed in Hardcover and be produced in audio. It is also free on Kindle Unlimited.

Debbie De Louise is an award-winning author and a reference librarian at a public library on Long Island. She is a member of the Cat Writers’ Association, Sisters-in-Crime, International Thriller Writers, and the Long Island Authors Group. She has a BA in English and an MLS in Library Science from Long Island University. Her novels include the four books of the Cobble Cove cozy mystery series: A Stone’s Throw, Between a Rock and a Hard Place, Written in Stone, and Love on the Rocks. Debbie has also written a romantic comedy novella, When Jack Trumps Ace; a paranormal romance, Cloudy Rainbow; and two standalone mysteries, Reason to Die and Sea Scope. She lives on Long Island with her husband, Anthony; daughter, Holly; and three cats, Stripey, Harry, and Hermione.

Connect with Debbie in the following Places: