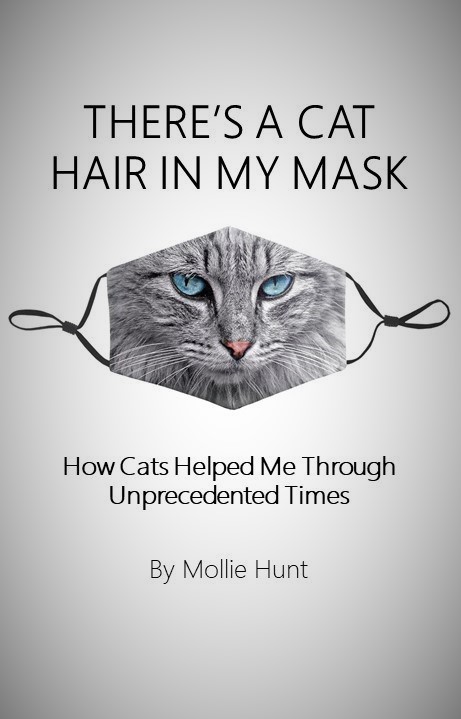 It’s the first day of a brand new year!

I didn’t do it on purpose, but this morning I finished the second draft of my memoir, THERE’S A CAT HAIR IN MY MASK: How Cats Helped Me Through Unprecedented Times and sent it off to my editor. This is something completely different for me, but once I realized it was something that needed to be said, I had to go ahead with it. The story covers the period of time between the emergence of the COVID-19 pandemic in early 2020 and the adoption of my cat Jaimz in April 2021. Those were hard times for me—for everyone. Stuff happened I’d never thought I’d see. Just one thing kept me from falling off the edge: cats.

In CAT HAIR, I convey how my relationship with the cats in my life, their subtle (and sometimes not so subtle) teachings, showed me how to navigate when I felt I wasn’t going to make it. It wasn’t an easy story to write, and I doubt it will be easy to read. Still, I’m hoping it may touch a few of you who have had your own troubles with this everchanging tide we call the new normal.

Here is how it begins:

I am a cat writer. I write cozy mysteries. My fictional stories don’t include swearing, graphic violence, or explicit sex. I also write cat poetry and sci-fantasy about cats saving the world. The sci-fi isn’t as cozy as the cozies, but they have an optimistic premise. I do love a happy ending!

This is a different sort of story. There are no holds barred here. I will swear and criticize the government. I will complain, and whine, and give too much information. There are mentions of emotional and physical abuse and violence that move me to issue this general trigger warning.

So if you don’t want to find out that your cozy author is a foulmouthed liberal democrat who went through shit and has opinions on everything, this is not the book for you. If you want a story from my heart and soul, please read on.

When the coronavirus COVID-19 hit the world like a blistering shitstorm, I was living in an old house in Portland, Oregon with my husband and three cats. It was the beginning of February 2020, and Jim and I had just returned from our semi-annual vacation in Mexico. I don’t remember hearing anything about a pandemic as we watched the glorious sunrises and sunsets from out beachfront suite on Cabo San Lucas. The only American horror story I knew of was our explosive political situation. Even with the devious mind of a mystery writer, I would never have imagined what was to come.

Nice as it was to hang out in warmer climes and eat fresh fruit and enchiladas, I was happy to get home. The flight, the airports, and the interminable line at customs were grueling. By the time I arrived into the dark, cold, rainy Pacific Northwest, I was exhausted.

We’d hired an excellent live-in cat sitter for the week we were gone, so the cats weren’t too mad at us for leaving. In fact, they probably had more fun with Jenn, an innate cat person, than with us on a daily basis. Still, it was so welcome to finally have a few cats on the bed, and when I went to sleep that night, I slept well.

As with most vacations, the return was fraught with undone chores and catch-up. I plunged headfirst into answering emails, planning promotion for my new book, and writing, as well as restocking cupboards, watering plants, etcetera, etcetera, etcetera. I could feel the anxiety rising and wondered, as I always do after being somewhere relaxing, if this heartless jerk back into reality was really worth it.

Jim liked to watch the evening news. Unless he was working, every day at between five and six he sat down in the green easy chair we inherited from his father and clicked on the television. He was arbitrary about stations except for FOX, which was infamous for its politically skewed reporting. He refused to watch that one. The others are probably skewed as well, but skewed to our own point of view, so that worked.

During our time in Mexico, we hadn’t caught the goings on in the States. We figured they could get along without us, and us without them. That was our usual mode of travel, with the exception of Mazatlán in January 2017. On that trip, we found ourselves glued in horror to our TV screens and mobile devices as the new President systematically stripped our country of things we’d worked so hard to achieve with a flurry of executive orders. But that’s another story—this one is about a different tragedy, or I should say, a series of tragedies that knocked us on our collective asses like fallen dominos. This story is about cats.

So, there was Jim watching the news. The first segment was all politics and disaster: the upcoming presidential primaries, Trump’s impeachment trial and disappointing acquittal, another mass shooting, bringing the number up to twenty-eight just this year. Then it switched to reports of a deadly virus which had taken hold in China and was now jumping to other countries including the U.S. Its origin was still unknown—a zoonotic disease, transmitted from animals such as bats or pangolins? A bioweapon of mass destruction from some secret Chinese lab? Who knew? The news anchor speculated, as they do, on the worst case scenario. That was the first time I heard the word, pandemic, outside of history or dystopian fiction. Little did I know that one word would become commonplace, used everywhere by everyone around the world. But I suppose that’s what pandemic means.

The Merriam-Webster Dictionary describes pandemic thus: “An outbreak of a disease that occurs over a wide geographic area (such as multiple countries or continents) and typically affects a significant proportion of the population.” I didn’t pay much attention. I knew the news media latched onto anything that might make a good story—they would go to any lengths to get people to watch. A simple winter storm was elevated to a snow-pocolypse; a political protest became a rampage. That’s how they made their money. I assumed this pandemic scare would be no different and went off to make dinner for the cats.

Here’s how it ends:

It has been nine months since Jaimz’s adoption, and almost a year since I first met the little gray cat who was destined to save my life. Instead of the continuing weight loss foretold by OHS the doctor, he’s started gaining. I figured out that because of his sensitive stomach, he couldn’t eat much at one sitting so I supplied him with a microchip-activated feeder that allows him eat whenever he pleases. He is holding his own against the kidney disease, and the thyroid condition is easily regulated with medication which he takes like a champ. My veterinarian has become personally involved with his wellbeing as she does with all her patients, and we work together to unravel the mysteries of the feline condition.

Jaimz is happy, healthy, friendly, and sweet. His presence in my life has made me a better person, a more compassionate and sympathetic human. His fortitude and tenacity have inspired me to get over myself and carry on.

The pandemic is still with us, a new variant discovered only recently, bringing us back to square one even though many of us are vaccinated. There is still racism and social unrest—it will take time to undo the damage along those lines, and at this point, we’re just beginning to figure out what those amends might look like. There are still assholes who put their desires ahead of the welfare of others. There are still the houseless, as there will be until the inequity between the very poor and the obscenely rich is reconciled.

I continue to wrestle with anxiety and depression, some based in the reality of a crazy world around me and some stemming from my nearly-seventy-year-old mind. I still have pain that eludes the doctors and therefore is nearly impossible to treat. But as I write this, Jaimz standing on my chest, making it a challenge to type, I know these things:

It’s not what happens to us that matters, but the choices we make in response.

Getting out of ourselves by caring for others is a miracle cure for many ills.

We don’t know what tomorrow will bring—whether saving the world or taking a nap, make each moment worthwhile.

This I’ve learned, not from my fellow humans, but from cats. Cats have the ability to meet us on a deeper level. It may be telepathy, empathy, or something we have yet to measure, but whatever our connection, the result is healing beyond words.

The pages in between tell about what I did, what I felt, what I imagined to be true. But mostly it tells about cats and what they teach us if we are prepared to listen and learn.

2 Responses to 2022 DAY ONE-FINISHED MY MEMOIR!