Who Are the Cat Writers’ Association? BONNIE ELIZABETH

Today’s guest on Who are the Cat Writers’ Association? is author Bonnie Elizabeth, a prolific fiction writer who, like me, has a few cozy series under her belt. Unlike me, she writes other fiction, short fiction, and is published in several bundles and magazines. 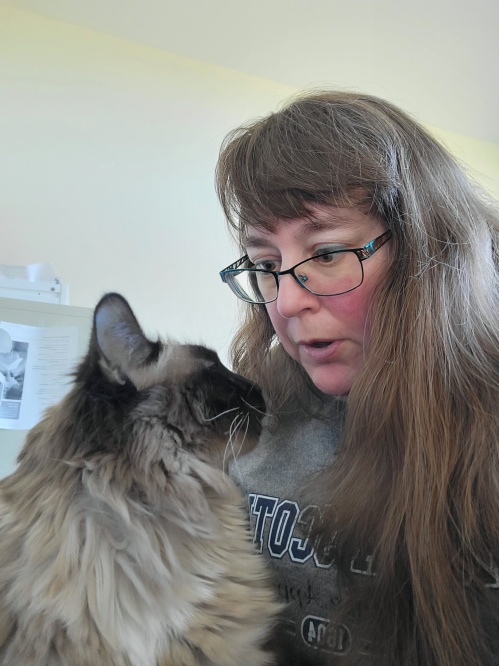 Bonnie, tell us a bit about your writing career.

I write genre fiction and I’m purposely being vague because I have stories that are straight up mysteries, some that are science fiction, and some urban fantasy, and some second-world fantasy.

In novels, I tend to hover around paranormal cozy mysteries, most of which feature cats in some way or another. I have a ghost cat in my Ash Jericho series. I have a feline familiars in my Familiar Café mystery series. Even the newest series I’m starting, while it has ghosts, it doesn’t feature cats, but you better believe my main character has cats at home.

I write full time and I write a lot. I’ve had short stories featured in a number of smaller publications and in Fiction River and Pulphouse.

How do cats inspire your creativity?

I’m not sure if my cats inspire my creativity so much as make it challenging by sitting on the keyboard. My two big boy cats always seem to want to be there, often at the same time. I suppose that inspires me in how to type creatively!

Cheysuli, my chocolate point Siamese, inspired me to blog daily at her blog, discussing her adventures and commentary on life in general, so in that sense, my cats are the reason I write daily and that I can turn out as many words as I do. 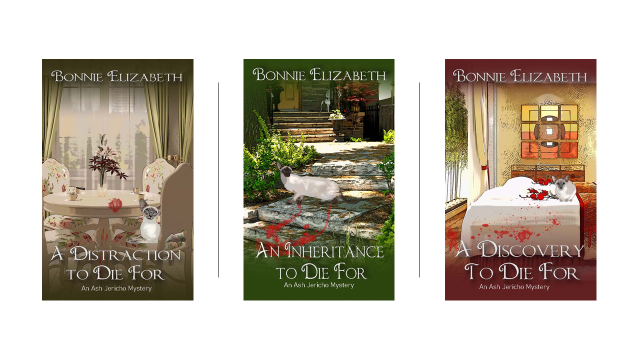 Short answer, no, they don’t. Longer answer is that Gemini is my eldest cat, a brown tabby who found me as a tiny lost kitten the day after I had lost the second of two beloved cats who died within a week of each other. She tolerated the calico I had then and tolerated Cheysuli when I got her, but she didn’t love them.

When my calico died and I found Ichiro at a shelter, Gemini mostly ignored him. Cheysuli wasn’t thrilled with Ichiro’s attentions and after she got over her pique that I would adopt another cat, she began to like him a little bit. When Chey died, Ichiro and Gemini went at it almost every single night.

We knew that Ichiro was quite a lovebug and needed another cat to interact with but I wasn’t ready to find another cat. Still, my husband took me to the shelter and he picked out a five month old tuxedo cat.

Ham joined the family and was segregated into our sunroom. He was a door-dasher as a kitten and the third morning he rushed out of the sunroom into the living area where Ichiro was. Ham ran up to Ichiro and gave him the kitten version of the alien face hug and dashed off. Ichiro’s tail went up, ears went forward, and he trotted off after Ham. The next day of door dashing, and Ham was curled up with Ichiro getting a bath.

Gemini, however, loathes Ham. It’s gotten so bad that she lives in the main bedroom suite and the boys live in the rest of the house. They do interact some, but Ham usually gets yelled at for bothering her. Now and then—maybe once every three months, Ichiro goes after Gemini and that fight is much, much worse than her irritation with Ham.

It’s clear to me that Gemini is the problem child but she’s nearly 17, so she’s not going anywhere.

In 1964, on Valentine’s Day, shortly before my first birthday, our next door neighbor’s cat gave birth. She talked my folks into what a great gift a kitten would be for me on my birthday and so two months later, I had my first cat. She was a black medium hair with a white patch under her chin. She lived twenty years, moving with us throughout the United States.

I, of course, would have loved another cat, but my mom wasn’t really a cat person, though she liked ours well enough.

It definitely runs on my dad’s side of the family. My dad grew up on a small hundred acre dairy farm in Racine County Wisconsin. There are family stories of how as a teen he got his ma to accept a big old orange tom to be allowed in the house. They called the cat Pert and I guess he didn’t particularly like anyone except maybe my dad and my grandmother.

My dad was the reason I grew up with a cat. He’d have had another cat or more than one cat in a hot minute. He’d always had cats around the barn and while they were definitely barn cats, they always got treats of extra milk and sometimes extra scraps of food. Remember this was probably in the 1940s and 1950s.

My cousin on my dad’s side has adopted three Maine Coon cats, driving for over a day to pick them up. She’s passed on the love of cats or at least tolerating women who love cats to at least one of her sons, whose wife has her own beautiful Maine Coon.

Bonnie Elizabeth began making up stories and telling them to her black cat, Jet, when she was just a child. Jet, in turn taught that her highest calling was serving cats.

Bonnie has written columns for a cat focused animal shelter newsletter, has blogged as her cat Cheysuli, and written novels and short stories in a variety of genres, many of which feature felines that are far from ordinary.

In addition to writing about cats, Bonnie has volunteered at animal shelters and worked as a veterinary receptionist for over a decade.

Currently, she shares her home with three cats and her husband. She’s a member of the Cat Writer’s Association and is at work on the next book in the Familiar Café series.

Gemini, a found longhair brown tabby who desperately wanted to be an only cat and got stuck with an owner who is anything but a one cat person. She’s a senior now at 17 (which seems impossible) but she’s still spry and does her best to put the boys in their place.

Ichiro a large Siamese mix with big blue eyes. He’s a big love bug and really needed another cat to love on when we lost our Siamese female, Cheysuli.

Ham, the cat my husband picked out (and he will never do the picking again), a tuxedo cat with attitude to spare. Ichiro adores him.

Find out more about Bonnie on her Social Media, Websites, and Sales sites:

2 Responses to Who Are the Cat Writers’ Association? BONNIE ELIZABETH