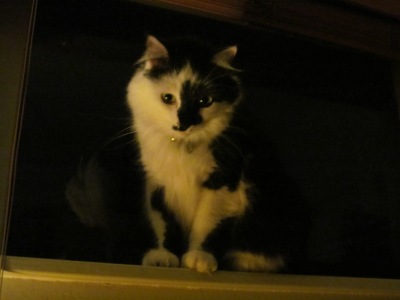 The trouble with being in hell is that everything else goes as usual. Bills need to be paid, meals cooked, obligations fulfilled. And as I sat in that doctor’s office while the nurses cleaned up my wounds, I knew I had a cat to go back to. A crazy cat. A 911 cat, whom, to complicate matters, I loved with all my heart. I had seen the anguish in his eyes as he threw his fit. I wasn’t the only one in pain: Lux was in his own hell. There had to be a reason, and Jackson promised we would find out what it was.

That was good and all, but meanwhile, demons were eating my brain. Time had gone pear-shaped. Any stimulus was too much. To think ahead caused anxiety and fear, a glut of emotion so intense it was nauseating. Within the next few days, I quit my volunteering duties at OHS and Hospice, I stayed away from facebook and the gem game I like to play on my phone – even those little popping lights were too much for me. I canceled every appointment I had, no matter how important it was or embarrassing to bow out. I stopped writing my book. I made appointments with my therapist, begging her on her voicemail to fit me in. Then I laid low.

I continued to visit Lux in his room but was fearful every time which I’m sure he sensed. We couldn’t let him out anymore, which he hated. Something had to be done and fast.

Jackson put me in touch with a local vet who was familiar with Lux’s case and had seen him before. She prescribed medication to relieve his symptoms and talked about possible causes for the unpredictable behavior, such as a brain tumor or anomaly, a pain condition, or a seizure-like event where all the nerves fire inappropriately, creating a pain/fear reaction. There would have to be tests. Though Lux had been extensively tested during the weeks before he came to me, there was more they could do, and Jackson wanted to do all of it. He was not about to let this wonderful cat suffer.